Afew weeks after Saddam Hussein invaded Kuwait in 1990, several new Sudanese students appeared at my school in Khartoum. Halfway through the term they arrived, bewildered and dressed in what were clearly swiftly and randomly put-together clothes – shoes a size too big, dresses a size too small. For the first few days they mostly sat quietly in class, unable to adjust to the new academic material and seemingly not interested in making friends. One child spent her entire first week at the back of the class looking vacantly out of the window at the school gardens, tears silently streaming down her face.

Slowly they began to open up and tell us who they were. These were Saddam’s refugees: the children of Sudanese expats working in Kuwait, who had grabbed what they could and fled the country. We clustered around them as they told us the stories of the invasion – stories that have since become woven into the popular mythology of Saddam’s brutality. One harrowing detail they repeated was that Iraqi troops entered a hospital and ripped baby incubators from their electric sockets. They all refused to countenance the possibility that they might never return.

It was confusing, then, that when Operation Desert Storm – the military campaign by the United States and its allies to reclaim Kuwait from Saddam – began in January 1991, the majority of these children were fiercely opposed to it. One angry girl, who had lost weight rapidly through anxiety since she’d arrived, stood on a desk and shouted, “It’s going to get more messy! The whole world is going to get more messy!”

It is now three decades since that moment, and after the assassination of Iran’s military chief Qassem Suleimani last week, this child’s words echo. Her intuition cut through all the legal, political and moral questions. All that mattered to her was that, ultimately, more people would suffer and the situation would become impossible to contain. And those people who would suffer most would be her own, not the well-armed and well-armoured liberating forces.

It’s always a difficult balance to strike, between happiness that a cynical tyrant such as Saddam or Suleimani is eliminated, and the fear that the intervention could save lives in the short-term, only to ultimately accelerate instability. In real terms this instability means more bloodshed, more refugees, more children whose lives change for ever overnight.

The victims will be America’s Arab proxies, be they nations such as Saudi Arabia and its allies, or military factions

To state that such interventions are dangerous is not a detachment born of an anti foreign-intervention principle. Happy at the death of a menace but “nervous” and “scared” is how some I spoke to in the region summarised their reaction to Suleimani’s killing. Away from the western analysts’ discussions of how this assassination will affect the re-election or impeachment of President Trump, or from the moral question of whether manhunting is a legitimate tool of foreign policy, life has become even more treacherous for millions in the Middle East.

Suleimani has brought pain and suffering to the region by running proxy wars, smothering revolutions, and extending lifelines to tyrants such as Syria’s Bashar al-Assad, who otherwise would have been rightly toppled. But his killing will have asymmetric results – American lives will go on as usual, while the Middle East will be destabilised even further.

The problem with engaging in war by assassination in the region is that the effort never goes all the way to ending the fighting. The problem is not foreign intervention in itself but the way America goes about foreign intervention. Striking and withdrawing, removing heads of government or other perceived enemy chiefs then packing up tools and leaving (or in drone warfare, turning off a screen and going home), achieves little – no fundamental resolution. Suleimani’s killing may solve a temporary problem, real or confected for White House PR purposes, but the blowback will not be felt by those who are making “world war three” trend on social media.

It will not be a new world war – that kind of talk only shows how effective the American propaganda machine has been in manufacturing the impression that there is an annihilating threat from Tehran. Suleimani’s killing has been justified as a defensive measure against possible attacks on US embassies, consulates and military in Syria, Iraq and Lebanon. The plotting was “clear and unambiguous” according to General Mark Milley, the chairman of the joint chiefs of staff. But a US official told the New York Times that the “new” intelligence merely pointed to “a normal Monday in the Middle East”.

Does any of this sound familiar? Unquestionable intelligence that an imminent strike against western lives requires immediate and dramatic scrambling? The ruses for the calamitous 2003 invasion of Iraq have not been updated, merely recycled. Hundreds of thousands of deaths later and, just to drive home the unlearned lesson even more, after a post-invasion quagmire that gifted Iran and Suleimani power and influence in the country, we are at the same place. Except this time it seems no one went to the effort of sexing up a dossier or coming up with a “WMD ready within 45 minutes” excuse for an attack. 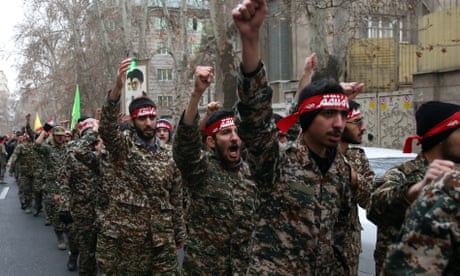 What will happen instead of world war three is an escalation in which Iran, without the ability to retaliate on US soil, will seek to reassert its dominance in the region. The victims will be America’s Arab proxies, be they nations such as Saudi Arabia and its allies, or military factions. An evacuation of US expats is already under way in Iraq. But citizens of Iraq, and of the nations within the larger regional war zone, have no such option, no refuge from collateral damage. For them, as the young girl said three decades ago, the world has just become more messy.

• Nesrine Malik is a Guardian columnist

2019: the events to watch out for in world politics, sport and arts