The England centre Emily Scarratt is one of the best readers of play on a rugby pitch. She is not so great at spotting a dummy off the field, it turns out. When she was the only one of the three England women nominated for the World Rugby player of the year award who was flown to Japan for the ceremony last weekend, it did not occur to her that management might already have an inkling.

“As I understood it I was going on behalf of the England squad,” Scarratt says. “Now I start to smell a bit of a rat.”

England were in the middle of preparations for their autumn internationals and Scarratt had three days, before Saturday’s game against France, for the 12,000-mile round trip to Tokyo. Time enough to watch the men’s World Cup final, eat a little sushi, see a couple of temples – and hear herself named the best women’s player of 2019. 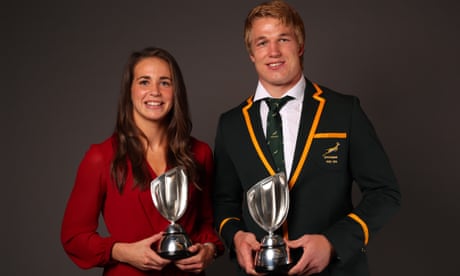 She is bright-eyed and chatty, even though she has been back in the country a few hours. Perhaps it is no surprise the 29-year-old’s super powers include immunity to jet lag. Her England coach, Simon Middleton, speaks of her with awe. “She can do things that no other player can do and that includes in the men’s game,” he says.

Her running, tackling and kicking were totemic in England’s Six Nations grand slam last season, despite being injured before and during it. “I’d just about got fit from my hamstring injury, then I hurt my toe,” says Scarratt, who thinks those off-field concerns made her worry less when she actually went to play. “It sounds strange but it seemed to work.”

She had only recently returned to XVs. A two-year stint as Great Britain’s Sevens captain – fourth place in Rio, Commonwealth bronze in Australia – taught her that her body was capable of far more than she imagined. “It exposes everything, it’s savage. It pushes you to every single limit you didn’t realise you had. You learned a lot about yourself because you have to go to some horrible places to finish games.”

Middleton says the player Scarratt most reminds him of is the former Bath and England centre Jeremy Guscott. “She never looks rushed and she’s got great dexterity. I watched a video of her playing for Loughborough Lightning last year, where she had the ball in one hand, fended a player off, changed the ball to the other hand, fended another player off, changed it back and popped it over the top – all in no time. I rewound that 10 times because I couldn’t believe what I’d seen.”

No doubt her hand-eye coordination had something to do with her versatility: growing up in Leicestershire, where her parents have a potato farm, she played every sport her school offered and more – football, netball, basketball, tennis, rounders. By the time she was 16 she was heading to a different training session every evening of the week. “It was chaos,” she says. But rugby was her great love, ever since she picked up a ball at the age of five, having tagged along to her older brother Joe’s class. She played alongside the boys until, at 12, she had to join a girls’ side; on the weekends, she and Joe fought over who got to see Leicester Tigers on the family’s second season ticket.

Sign up to the Breakdown for the latest rugby union news

Becoming a professional rugby player seemed impossible then; even a few years ago, female players assumed that privilege would belong to a future generation. But at the start of this year, 28 women were handed contracts to play for England. None became rich – some even took a pay cut to go pro – but their lives have changed demonstrably.

When she worked in the PE department at King Edwards School in Birmingham, Scarratt barely had a moment free to herself. “I used to get up early to train, do a full day of work, run after-school clubs, train again in the evening, fall into bed and repeat.”

Now she is living on her own for the first time, which she loves, and adjusting to far less hectic routine, one where rugby can always come first.

Still, giving up the chance to compete for a medal in Tokyo next year was difficult, she says. “It was about the 2021 World Cup. Last time we had less than a year to get back to XVs [after the Rio Olympics] and it didn’t feel long enough.”

Scarratt has a World Cup winners medal from 2014 but she also has two silvers from 2010 and 2017, and if anyone can empathise with the England men’s rugby players right now, it is her. At the last tournament, England beat France easily in the semis only to lose 41-32 to New Zealand.

“It’s really tough. People say ‘four years’ time’ but you think – four years’ time? You can’t think that far ahead. You’ll constantly look back and think what if. That haunts you for a bit.”

England came second to New Zealand again in this summer’s Super Series, although she is more phlegmatic about that defeat. She says that with England as dominant as they are against the rest of the northern hemisphere teams defeat can be a vital learning tool.

For now, the focus is on beating France, home and away, in the autumn internationals. When the two sides met in the Super Series, the game was a thriller, with Scarratt scoring 15 of England’s 20 points including a last-gasp, match-winning penalty. France have their own star player in scrum-half Pauline Bourdon, as well as a lineup of imposing ball-carrying forwards.

Is Scarratt concerned about the imbalance in the women’s Six Nations now that England are the only full-time professional outfit? She says not; she sees the quality of women’s rugby improving all over and hopes other unions will now come under pressure to provide women’s contracts too. This is, she says, the “sticky stage” of professionalisation, pointing out that the men’s game went through a similar period.

The increased confidence of young female players is something that impresses her daily. “Going through the development pathway of a big famous club like, for instance, Saracens, you’ve got to be firing straight away or you’re not going to be noticed. It’s certainly not how I came through. I sat in the corner very quietly for a few years.”

This, however, is her time.

… we have a small favour to ask. More people, like you, are reading and supporting the Guardian’s independent, investigative journalism than ever before. And unlike many news organisations, we made the choice to keep our reporting open for all, regardless of where they live or what they can afford to pay.

The Guardian will engage with the most critical issues of our time – from the escalating climate catastrophe to widespread inequality to the influence of big tech on our lives. At a time when factual information is a necessity, we believe that each of us, around the world, deserves access to accurate reporting with integrity at its heart.

Our editorial independence means we set our own agenda and voice our own opinions. Guardian journalism is free from commercial and political bias and not influenced by billionaire owners or shareholders. This means we can give a voice to those less heard, explore where others turn away, and rigorously challenge those in power.

We hope you will consider supporting us today. We need your support to keep delivering quality journalism that’s open and independent. Every reader contribution, however big or small, is so valuable

Turkish Open: Justin Rose two off lead as he goes for hat-trick of wins

Collard: Soul singer on sex, spirituality and 'looking up to oddballs'