Bhopal’s tragedy has not stopped’: the urban disaster still claiming lives 35 years on

Bhopal’s tragedy has not stopped’: the urban disaster still claiming lives 35 years on

he residents of JP Nagar have no way to escape their ghosts. This ramshackle neighbourhood, on the outskirts of the Indian city of  stands just metres away from the chemical factory which exploded just after midnight on 2 December 1984 and seeped poison into their lives forever. The blackened ruins of the Union Carbide plant still loom untouched behind the factory walls. 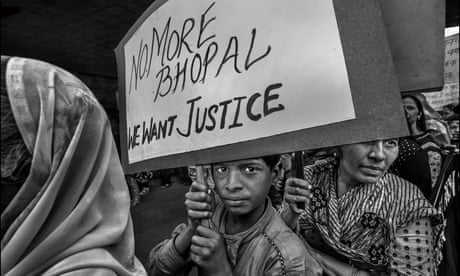 It remains the world’s worst industrial disaster, which saw 40 tons of toxic methyl isocyanate gas released into the air, killing over 3,000 instantly and condemning hundreds of thousands to a future of prolonged pain, cancer, stillbirths, miscarriages, lung and heart disease and the drawn out deaths of everyone around them.

“It would be better if there was another gas leak which could kill us all and put us all out of this misery,” said Omwati Yadav, 67, who can see the Union Carbide factory from the roof of her tiny one-room stone house, painted peppermint green with orange doors. Her body shaking with sobs, she cries out: “Thirty five years we have suffered through this, please just let it end. This is not life, this is not death, we are in the terrible place in between.”

Her husband Panna Lal Yadav, 70, who worked as a packer in the Union Carbide factory, points to the black marks and lumps all over his body. “The poison is still inside my body,” he says. “Here you can see it coming out.”

This week marks the 35th anniversary of the disaster yet the injustice suffered by the people of Bhopal remains stark and unrelenting. The official death toll is still disputed but an estimated 574,000 were poisoned that night and upwards of 20,000 people have died since from related conditions. No one from Union Carbide was ever tried for the gross negligence that led to the gas explosion, despite multiple criminal charges being brought against them in. No cleanup operation of the chemical waste – which was already being dumped into the local community before the explosion – has ever been conducted.

Surveys done by the Bhopal campaign groups have shown this toxic waste, which according to their tests contains six of the persistent organic pollutants banned by the UN for their highly poisonous impacts on the environment and human health, has now reached 42 areas in Bhopal and continues to spread. The pond where Union Carbide used to dump the chemicals sits festering and untouched, with children and wild pigs running on about on its banks.

The situation is getting worse, not better. We are seeing more and more second and third generation children being born with such disabilities

State officials have long disputed that this waste has any harmful impact, accusing activists of inventing it to get charity funding; offers by the UN and the German government to carry out tests and clear it up have been refused by the Indian government. However, SR Mohanty, chief secretary of the energy department for the state government, told the Guardian that plans have finally been made to carry out a toxicity assessment in the coming months.

The Guardian can also reveal the role the US government has played – and continues to play – in obstructing justice for the Bhopal victims, in order to protect American corporate giants Union Carbide and its now owner Dow Chemicals.

Those who did not initially perish in the blast live with a toxic sword of Damocles over their heads. New data collected over the past nine years by the Sambhavna Trust suggests that even after three decades, the mortality rate for gas-exposed victims is still 28% higher than average. They are twice as likely to die of cancers, diseases of the lungs and tuberculosis, three times as likely to die from kidney diseases and 63% more likely to have illnesses. The Trust’s data also highlights the fact that over the past three years, almost a quarter of gas exposed victims were diagnosed with an under-active thyroid, which can have devastating long term health impacts.

The data also suggests that the explosion has had a particularly adverse effect on women exposed to the gas, even as babies just days old, causing high rates of infertility, stillbirths, abortions, early menopause and wreaking havoc on menstrual cycles. As a result, many women in Bhopal continue to be abandoned by their husbands, believed not to be capable of fulfilling the familial duties expected of them.

Yet it is the lasting impact on the second and third generation, and on those yet unborn that haunts those in Bhopal the most. The Chingari children’s centre, established for those born with disabilities as a consequence of the disaster, has registered over 1,000 children, with most affected by cerebral palsy, muscular dystrophy, autism, intellectual disabilities and severe learning difficulties. “This is the terrible legacy of Bhopal: all of these children were born to parents, or even grandparents, who were in contact with the gas that night,” said Rashida Bee, the centre’s founder. “The situation is getting worse, not better. We are seeing more and more second and third generation children being born with such disabilities and coming here. Bhopal’s tragedy has not stopped.”

Activists allege that there has been a deliberate suppression by the Indian government of any research which proves the long term systemic or genetic damage caused by the gas explosion, to protect the corporations involved. Proof of the lasting damage of the gas exposure could have major legal implications for Union Carbide and its current owner Dow Chemicals, who took ownership of the company and its legal responsibilities in 2001, in terms of compensation liability. A civil court case, begun in 2010, is ongoing in the supreme court, which is arguing to re-open the compensation case for victims of Bhopal.

Indeed, one recent rare study authorised by government medical body the Indian Council for Medical Research (ICMR), found that between 2016-2017, 9% of the babies born to gas-exposed mothers had birth defects compared to 1.3% born to mothers with no exposure. However, the study was subsequently discredited by the ICMR, who ordered it not to be published or disclosed.

“From the beginning the government has protected the corporations at the cost of human lives,” says Satinash Sarangi, founder of the Sambhanva Trust which runs an medical clinic that has treated over 300,000 Bhopal victims. This year marks the 25th anniversary of the trust, which was established entirely on the basis of donations given by thousands of Guardian readers who responded to a newspaper advert by the