There’s no competition in the world like the 24 Hours of Le Mans, the world’s most illustrious and oldest active automobile endurance racing competition, where the best drivers compete against each other for 24 hours straight.

The Le Mans race has evolved a lot over its almost century-old history, setting the stage for world records, groundbreaking engineering, and even terrible human tragedy. But no matter what, the essence of the race — a show of innovation and endurance — remains the same.

History Of The 24 Hours Of Le Mans Race 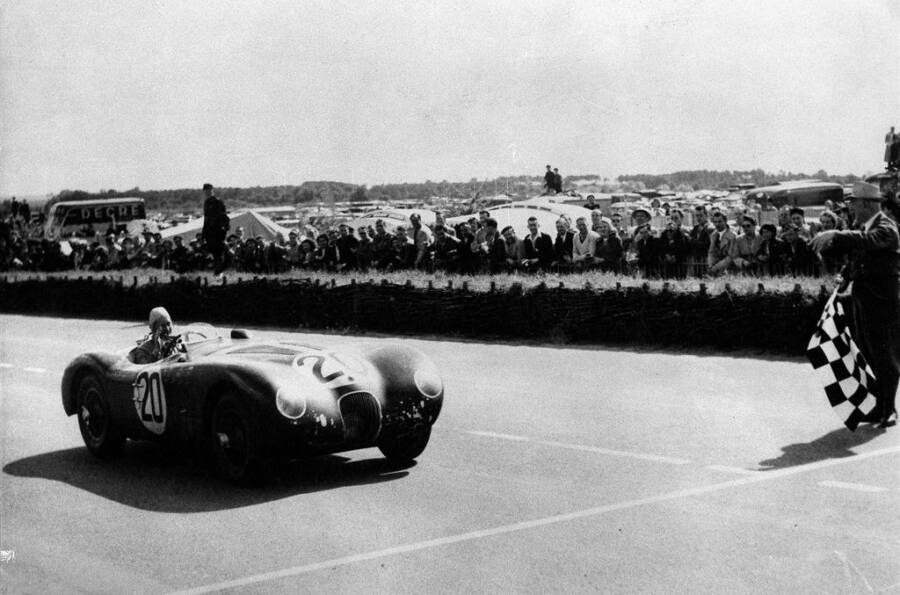 As the world entered the 1920s, a new era of economic prosperity took over North America and Europe, sparking the label “Roaring Twenties.” Innovative industry powered economic growth and a taste for automobiles began to emerge, especially among the French.

Watching the Grand Prix motor racing was a popular past-time, but European car fans soon yearned for more difficult challenges to test the cars and their racers.

In 1923, the Automobile Club de l’Ouest (ACO) organized the first-ever 24 Hours of Le Mans (or 24 Heures du Mans) race which ran a 10.7-mile course through the public streets of the Northwestern French village of Le Mans — a challenge never before seen in Grand Prix sports racing. The race track of Le Mans was dubbed Circuit de la Sarthe after the river that flows through the village.

The first Le Mans race was held between May 26 and 27, 1923, and rules were simple: whoever clocked the most miles during the 24-hour period won. The high-stakes endurance-testing competition quickly became a yearly race, and a prestigious affair for automobile companies to show off their latest innovations.

“The race is legendary, it fascinated me, and there I was about to take the start, as had drivers I considered heroes… The circuit was unlike any other. You approached such high speeds in the Mulsanne Straight before the chicanes. For a driver it was exhilarating.”

The 24 Hours of Le Mans pushed car makers to design better cars that were faster and more durable, enough to leave the rest of the competitors in the dust. Claiming the title of Le Mans was a coveted honor for car brands since it gave their products uncontested credibility and often translated to higher car sales. 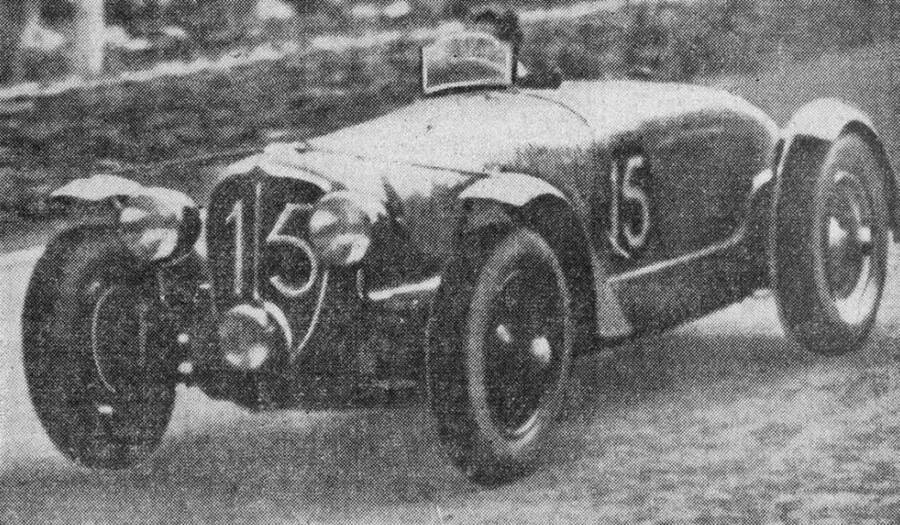 Wikimedia CommonsThe earlier years of the 24 Hours of Le Mans competition were dominated by the French.

Winner of the first 24 Hours of Le Mans race was the French driving team of Andre Lagache and Rene Leonard who competed against 33 other teams inside their 3-liter Chenard and Walcker vehicle. The pair traveled a total of 1,372.94 miles to win the inaugural 24-hour race.

After the Second World War broke out, the competition was forced to stop its activities and did so for ten years. The once full arenas and race circuits were destroyed by the travesties of the war.

After the war, the Le Mans race resumed and attracted even more interest from the public than before. It grew so popular that four years after it started up again it had evolved to become part of the World Sportscar Championship, a collection of the most significant sportscar events in the world to which the 24-hour car race became part and parcel. 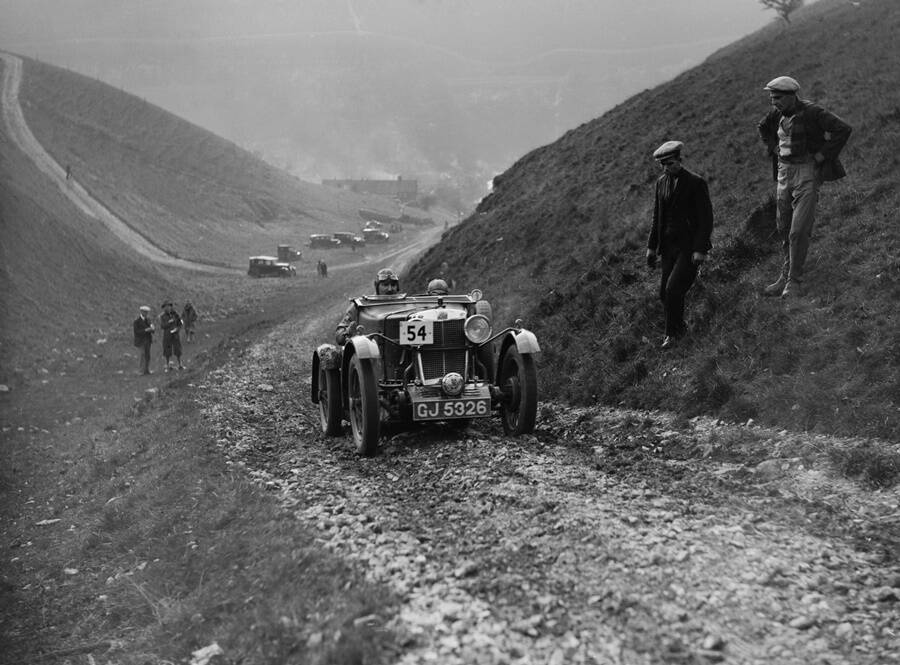 By the 1950s, the 24 Hours Of Le Mans race began attracting major car companies like Ferrari, Mercedes-Benz, Aston Martin, and Jaguar who competed to place multiple cars in the popular race, effectively spending millions of dollars to perfect their teams and take home the crown.

Le Mans was a hotbed for famous personalities, including A-list Hollywood actors. Some had been life-long fans while others took to the wheel after portraying drivers on film, celebrities like Paul Newman and James Garner.

The race also attracted other influential figures, such as Mark Thatcher, the son of former British Prime Minister Margaret Thatcher. It seems even the rich and famous were not immune to the addictive euphoria sparked by the illustrious Le Mans race.

“You see it with the Oscars. People vote, they say him or her. In this, you either cross the finish line first, and it’s either him or her,” Paul Newman explained of his love for the sport. Newman competed in the 1979 Le Mans in a Porsche 935, and continued to race later on in his 70s. 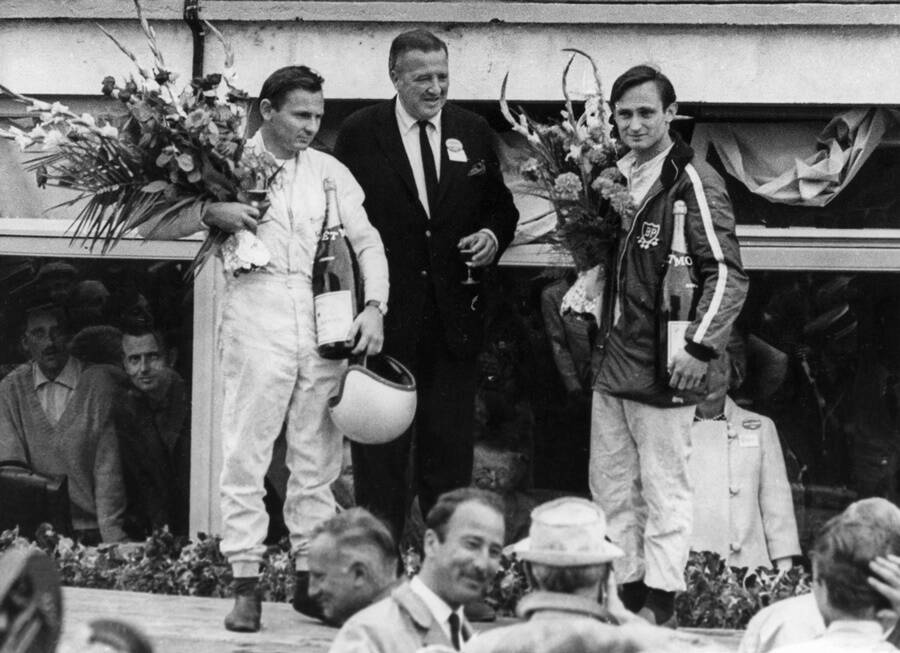 Keystone-France/Gamma-Rapho via Getty ImagesHenry Ford II poses with Ford drivers Bruce McLaren and Chris Amon after their historic victory at the 1966 Le Mans.

Some of the Le Mans races throughout the years bore unforgettable marks in the competition’s storied history. The 1953 race, for example, was the year when the now-legendary Ferrari racing team won at Le Mans for the first time.

In 1966, American automobile maker Ford made its historic run at the 24 Hours Of Le Mans. Ford’s American engine was considered an underdog of the race, particularly against the revving powers of the Italian Ferrari. The famous rivalry between Enzo Ferrari and Henry Ford II heightened the stakes that year, making the competition all the more exciting for sports racing fans.

Ford took home victory in 1966 — the first overall win for the Ford GT40 and the first win for an American car manufacturer at Le Mans. Unbeknownst to the public, it would be the first of many more wins by the Ford racing team with the car maker winning the title for four straight years after that.

The 24 Hours Of Le Mans competition, like any other extreme endurance sport, has seen its fair share of gruesome accidents. At Le Mans 1955, 83 race fans were killed after debris from the highly-flammable magnesium-alloy bodied Mercedes-Benz 300 SLR went flying into the bleachers after it crashed on the track.

At least 83 spectators were killed and over a hundred more injured in the 1955 Le Mans Disaster.

The grisly accident was reported in the June 27, 1955, issue of LIFE Magazine in terrible detail:

Hitting the Healey, the Mercedes took off like a rocket, struck the embankment beside the track, hurtled end over end and then disintegrated over the crowd. The hood decapitated tightly jammed spectators like a guillotine. The engine and front axle cut a swath like an artillery barrage. And the car’s magnesium body burst into flames like a torch, burning others to death.

Mercedes driver Pierre Bouillin, racing under the name Pierre Levegh, was instantly killed while 180 more spectators were injured. The 1955 Le Mans Disaster remains the most horrifying tragedy to have occurred in motorsports history. The severity of the accident led to an immediate temporary ban on sports racing across Europe until safety standards of the race could be improved.

Christian Bale and Matt Damon star in the latest Hollywood adaptation of the infamous Ferrari vs Ford rivalry.

The blood, sweat, and tears it takes for racing teams to conquer the challenging terrain of the Le Mans race has been heavily captured on film. Actor Steve McQueen, who later competed in sports racing off screen–though never at Le Mans himself — portrayed a tenacious driver competing at Le Mans in the 1971 film Le Mans.

The legendary rivalry between Enzo Ferrari and Henry Ford II — the grandson of Henry Ford who is known as “Hank the Deuce” — has also been the subject of fascination for filmmakers. The bad blood between Ford and Ferrari began after Ferrari abruptly canceled a business transaction between the two manufacturers while allegedly insulting Ford’s car designs.

The 2016 documentary The 24 Hour War centered on the feud between Ferrari and Ford and its unfolding behind-the-scenes at the 24 Hours Of Le Mans. The film received high approval ratings from both critics and regular audiences. 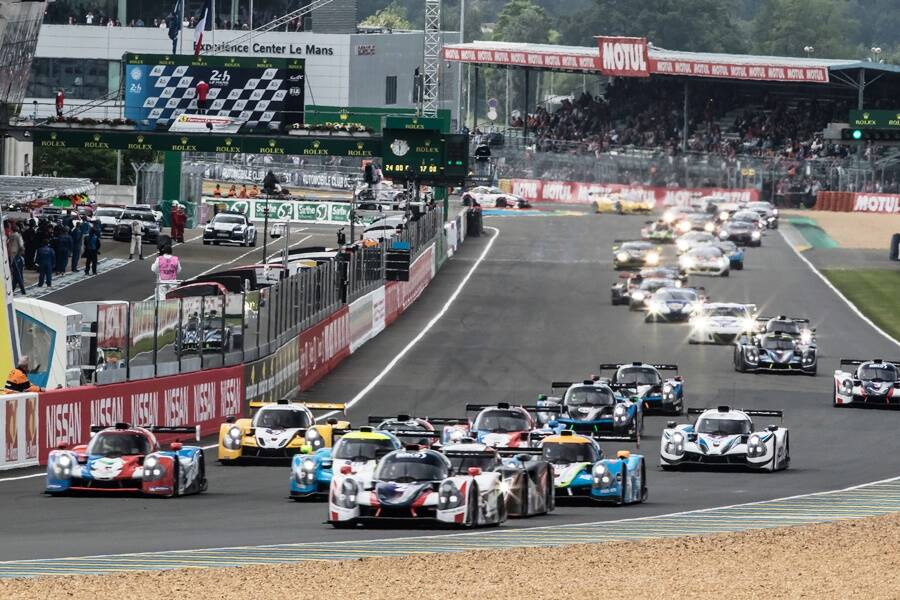 United Autosports/FlickrThe 24 Hours Of Le Mans is still the most elite sports racing competition in the world.

The same rivalry is also portrayed in Ford v. Ferrari starring actors Christian Bale and Matt Damon. In the dramatized version of the rivalry, Bale and Damon play the two figures crucial to Ford’s upset win against Ferrari in 1966 — British driver Ken Miles (Bale) and American car designer Carroll Shelby (Damon), who were said to be the masterminds behind Ford’s revolutionary race car, the Ford GT40.

The 24 Hours of Le Mans still runs today as part of the competitive FIA World Endurance Championship — a cross-track, cross-continental competition which takes place over the course of several months. The Le Mans race is now the last leg or “Super Finale” of the extravagant car racing competition, pitting drivers from around the world against each other in the ultimate test of endurance.